Static lice are actually tiny mites that feed off skin debris and adhere to the outer half of the hair shaft.. They often come in with hay - hence they are sometimes known as hay mites. Eggs are also laid on the hair shaft and look like small dust particles on a light-coloured pig.

Whilst you may not see them clearly without a microscope, you can see them with the naked eye, looking like specks of dirty on the hair. If you try to brush the hair or pick them off with your finger nails, the lice won’t some off. If you have a pale colour piggie, sometimes you see them better after bathing, looking like dirt on the hair shaft, that won't wash away.

They can cause some minor itching and scurfy skin but they are pretty harmless, but to prevent them getting worst you should try to remove them.

Where do they come from?

Hay tends to be the main source of static lice, hence their alternative moniker “hay mites”. They can also come in on some forms of bedding…the more ‘natural’ the bedding, particularly if it isn’t a heat- or freeze-dried bedding, the more likely it will be carrying parasites.

Can I prevent them?

It might not be impossible to completely avoid them, but you can – and should – certainly take steps to eliminate the main source of the contamination. Try changing the way you store your hay by avoiding plastic bags and instead allow the hay to air in a sheltered dry area, or in an open cardboard box. Don’t buy from farms or cheap hay. Try a different brand of hay or buy from a different shop.

How to remove them.

The best method is bathing and  is the traditional and default treatment Hay mites.  You will need to bath them about 3 times to successfully remove them. The reason for bathing this frequently is to catch the lice that hatch from the eggs remaining from prior baths. Bath 1 will eradicate live and dead lice and some eggs. Bath 2 will remove the lice that have hatched from remaining eggs and the eggs that the new lice may have already laid. Baths 3-4 will remove all remaining live and dead lice and by this point, if you have effectively removed the source of the infestation, you should have no eggs left either. 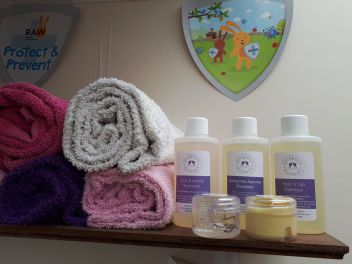 Different anti-parasitic shampoos are used by different people with different views: vets will often recommend bathing ina anti-parasitic ‘herbal’ shampoos. We recommend Gorgeous Guineas who  have designed a range of shampoos just for guinea pigs, and for the external lice issues,  they recommend their bestselling Lice ‘n’ Easy shampoo. These products mentioned are available online and without a prescription.

Whichever product you opt for, and whether you are giving one bath to finish up treatment options 1 and/or 2 or going for a course of weekly baths for a month, please note that when you are bathing you need to first shampoo the guinea pig thoroughly and rinse. Then apply a second shampoo, lather and allow to soak in for 5 minutes. This allows the active ingredients to take effect and work to kill the bugs. Rinse thoroughly and run a plastic nit comb through the coat whilst rinsing to comb out still more of the egg cases, which would otherwise cling onto the hair shafts mercilessly!